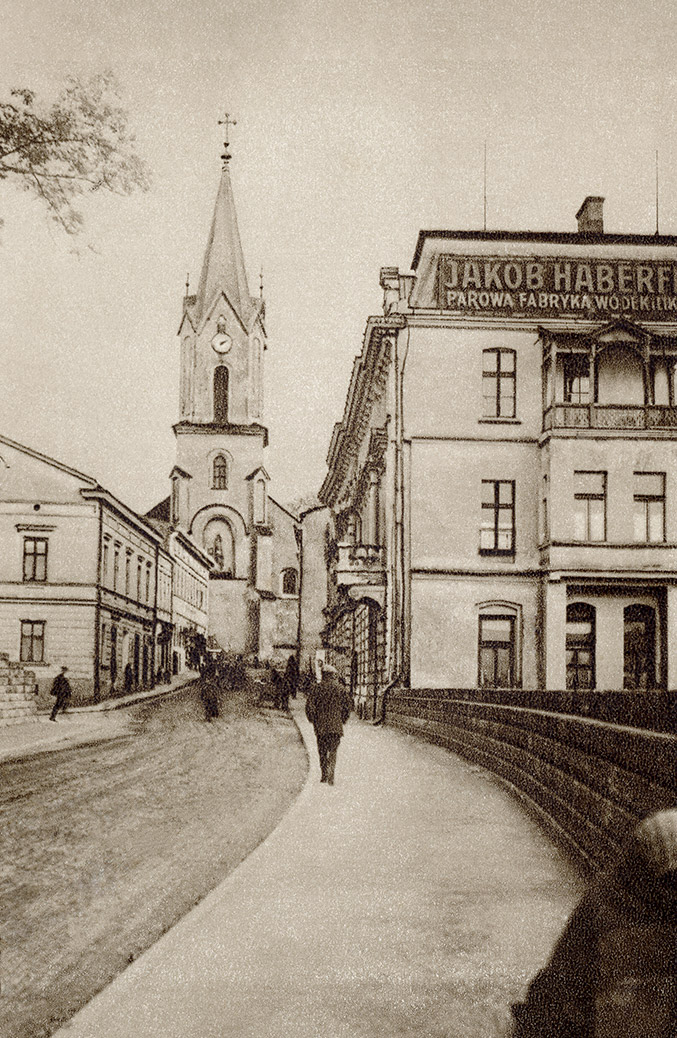 You create our history.

What are the best vodkas? The ones with true Polish history. Therefore, we hope that after this short reading, you will reach for the most delicious specialties of Haberfeld with even greater esteem.

Here is the history of distilling, old recipes, the crops of Polish orchards, and the character of handcraft closed in a bottle. Get to know the taste, discover the history.

Thank you for being with us.

The history of the Haberfeld family and their Steam Vodka and Liqueurs Factory is closely related to Poland and Oświęcim. The history of the Haberfelds has gone down in the history of alcohol production in our country. From 1804, when the factory was established, until World War II, the company developed dynamically, becoming one of the leading producers of alcoholic products in the country. The almost 140-year history ended with the tragic time of occupation, which cast a shadow over the further future of the family.

However, thanks to the personal involvement of Mirosław Ganobis, a friend of the Haberfeld family, a local community activist and enthusiast of the history of Oświęcim, the brand was reactivated. The museum was established on the site of the former Steam Factory, and the production of vodkas and liqueurs was resumed. The Nissenbaum Family Foundation plays a major role in the production of contemporary Jakob Haberfeld products.

History of the factory.

The factory, established in 1804, boasted over 40 varieties of different types of vodkas, liqueurs, rums, whiskeys, and aged vodkas. The specialties were: “Zgoda”, “Czysta”, “Basztówka”, “Zamkowa” and “Wiśniówka”. During World War I, the drink “Kaizerschutze” (meaning “Imperial Gunner”) was part of the equipment of every Austrian soldier.

The spirits were produced based on natural raw materials imported for Haberfeld from various regions of the country and from abroad. Bottled into porcelain and glass brand bottles, which, thanks to their shapes and characteristic labels, stood out on restaurant and shop shelves. It is worth noting that at the beginning of the 20th century, Haberfeld was the first Polish producer to initiate closing with a tin screw cap.

All the factory’s products had original coloured or embossed labels. Advertisements for Haberfeld were created by the outstanding artist Hans Rudi Erd, whose works promoted other popular brands such as Nivea and Opel. The most famous advertising poster of this artist is presented above.

The factory had many branches, incl. in Kęty and Kraków and representative offices in Bielsko, Katowice, Lviv and other cities. Apart from the domestic sales, the factory exported its products to European countries. Throughout the period of activity, it participated in many international and national competitions and exhibitions, achieving considerable successes.

The company also operated in other fields. In addition to the production of alcohol it owned a bottling plant of beers such as Okocim, Żywiec and Osiek, which it also distributed through its representative offices.

In addition, the family invested in the confectionery sector and since 1884 ran a chocolate and sugar factory in Bielsko-Biała. The Haberfelds were also involved in one of the first in the history of motorization, the Polish car factory “Oświęcim-Praga”. These vehicles during the period of the Second Polish Republic were used by such famous people as Jan Kiepura and Wojciech Kossak. Involved in the development of the city, the Haberfelds did not forget about the poorest, for which Alfons Haberfeld received on behalf of his family a government award – the Silver Cross of Merit in the second half of the 1930s.

In December 2020, the Polish quince liqueur was released on the market in a limited version of only 1,804 hand-numbered bottles.

We cultivate the pre-war tradition of producing vodka. Our luxurious alcohols require time, patience, and great care. We create them in small batches, using craftsmanship methods, only from natural ingredients, from mountain spring water and the highest quality spirits. The high class of our products is confirmed not only by the results of laboratory tests, awards and distinctions received. Primarily recognition is that we receive from our customers who return for our drinks with appreciation.